In May 1910, Frances Benjamin Johnston photographed one of Washington’s grandest homes, Anderson House, which had taken its place on Massachusetts Avenue five years earlier. Johnston would become one of the first American women to achieve distinction as a photographer. Her photographs of Anderson House—which had never been exhibited or published together until this exhibition—reveal both the photographer’s techniques and the original appearance of the historic house, offering a glimpse of how the Andersons lived in the mansion.

In all her work, Johnston strived to create “picturesque effects,” which required “good taste, a quick eye, a talent for detail, and a genius for hard work,” as she described in an 1897 article for Ladies Home Journal. Her sixty-year career encompassed photojournalism, portraiture, architectural and landscape photography, and projects furthering social causes. From the 1880s into the 1910s, she maintained her home and studio on V Street, Northwest, in Washington, D.C. Johnston’s landmark photographs of African American students at Virginia’s Hampton Institute (1900) and her survey of colonial American structures in the South (1926) are among her most important works.

Johnston’s photographs of Anderson House, like her work in other private residences, highlight architectural details, the use of natural light, and the context of a building. She also sought to capture a sense of the personalities who occupied the spaces. Johnston, after all, saw a house as an extension of its owners, as she expressed in a 1937 lecture: “When you build a house, you make a record of yourself, and experts in houses can tell by the house you build and live in what kind of person you are …. The story of houses is the story of the people that made them.”

This exhibition displayed twenty-five gelatin silver prints drawn from a larger collection of ninety-seven photographs of Anderson House taken by Frances Benjamin Johnston, which the Society of the Cincinnati purchased for its library collections in 1977. Explore the full collection on our Digital Library. 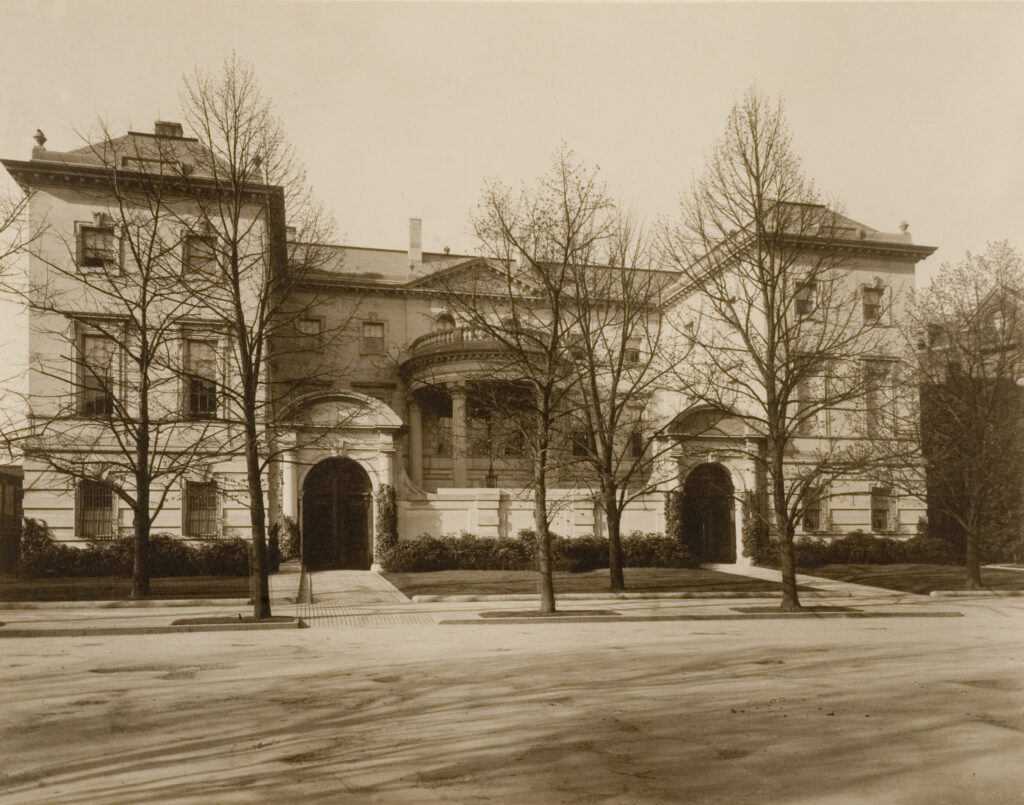 Click for a larger view.Façade
When the construction of Anderson House was completed in the spring of 1905, newspapers deemed it “a Florentine villa in the midst of American independence” with interiors that were “a dream of beauty and good taste.” That November, the Washington Post declared it “in every way deserving of the over-worked adjective ‘palatial’,” but also “a pity such a place should be put upon so small a piece of ground.” Showing that ground—and putting the building in the context of its surroundings—is what Frances Benjamin Johnston intended in the view of the façade, which features the broad avenue and original Linden trees flanking the paved sidewalk. 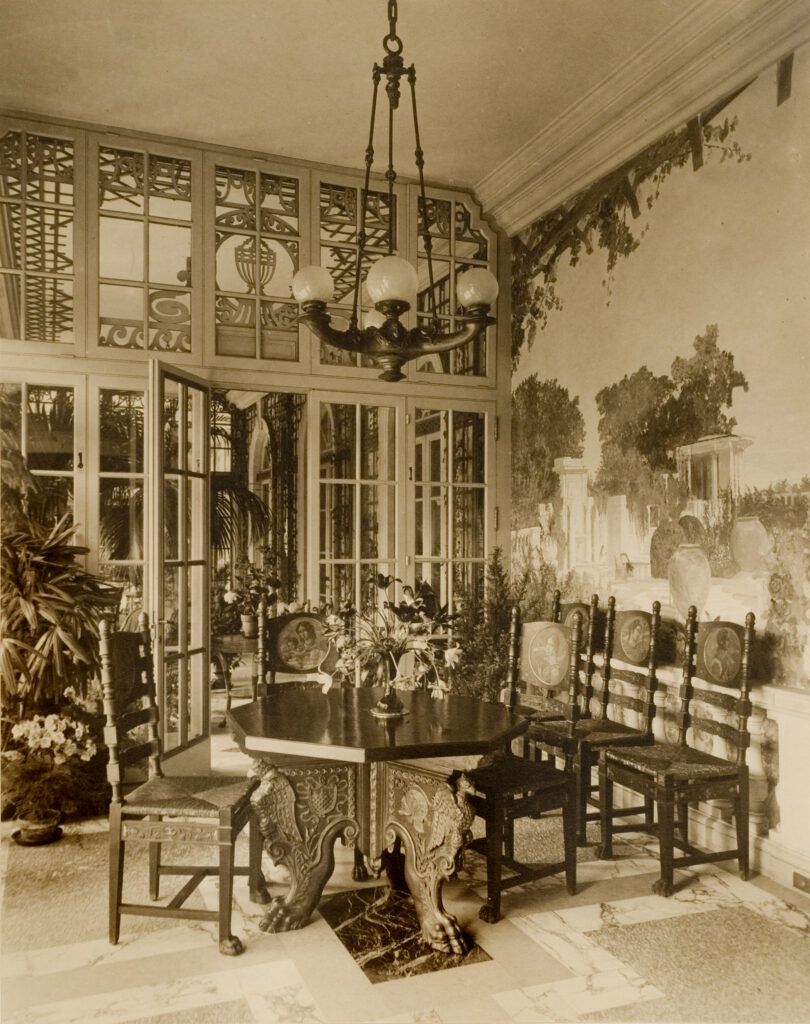 Click for a larger view.Breakfast Room
Despite the personal nature of some of the rooms in Anderson House, Frances Benjamin Johnston preferred to work without the homeowners present. The Andersons presumably obliged, although remained in Washington in May 1910. In the sun-filled, first-floor Breakfast Room, adorned with murals of the Andersons’ Massachusetts estate, Larz Anderson relished “the idea of having a garden and flowers and springtime inside the house while blizzards raged without.” 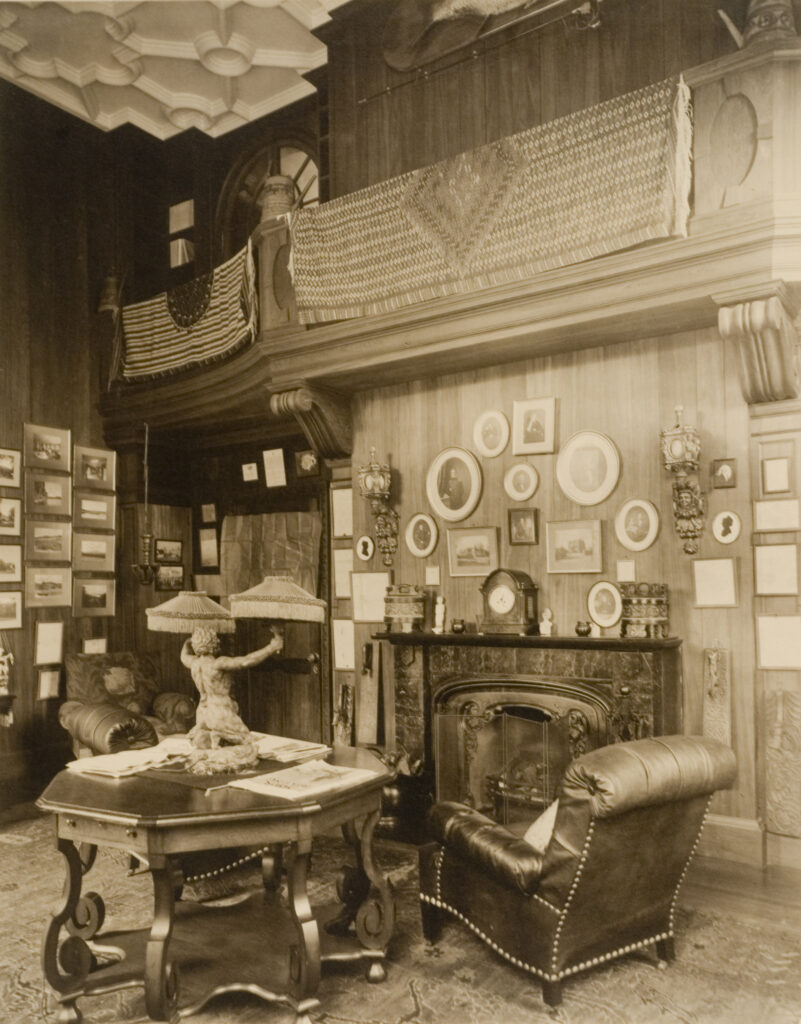 Click for a larger view.Cypress Den
The second-floor Cypress Den, which also served as Larz Anderson’s study, offered a private space where Larz and Isabel could spend quiet hours in each other’s company. The couple recorded “camping out” in the Cypress Den—which had a loft bedroom attached—when not entertaining or going out in Washington. 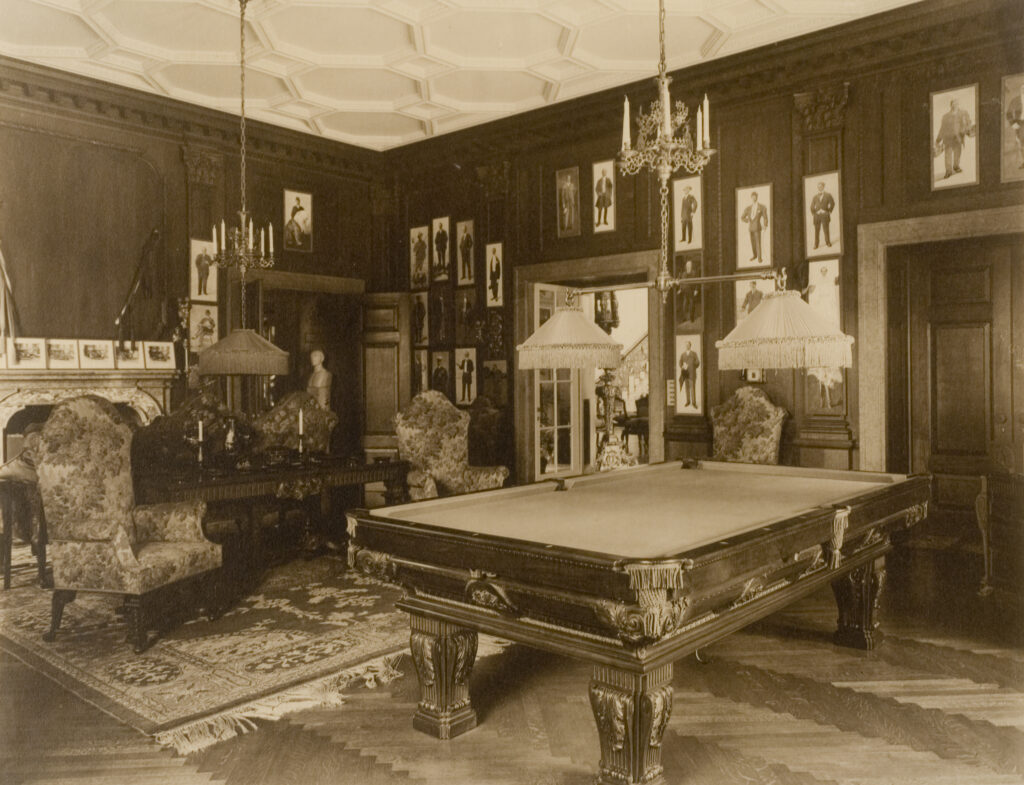 Click for a larger view.Billiard Room
On the west end of the Ballroom, the Billiard Room served as both a personal room and a space for entertaining close friends. Its walls were filled with nearly one hundred framed mementos of the Andersons’ lives, including photographs of their yachts and automobiles. The most prominent items were sixty-nine caricatures of well-known Washington personalities commissioned by Larz Anderson from the artist Clary Ray. 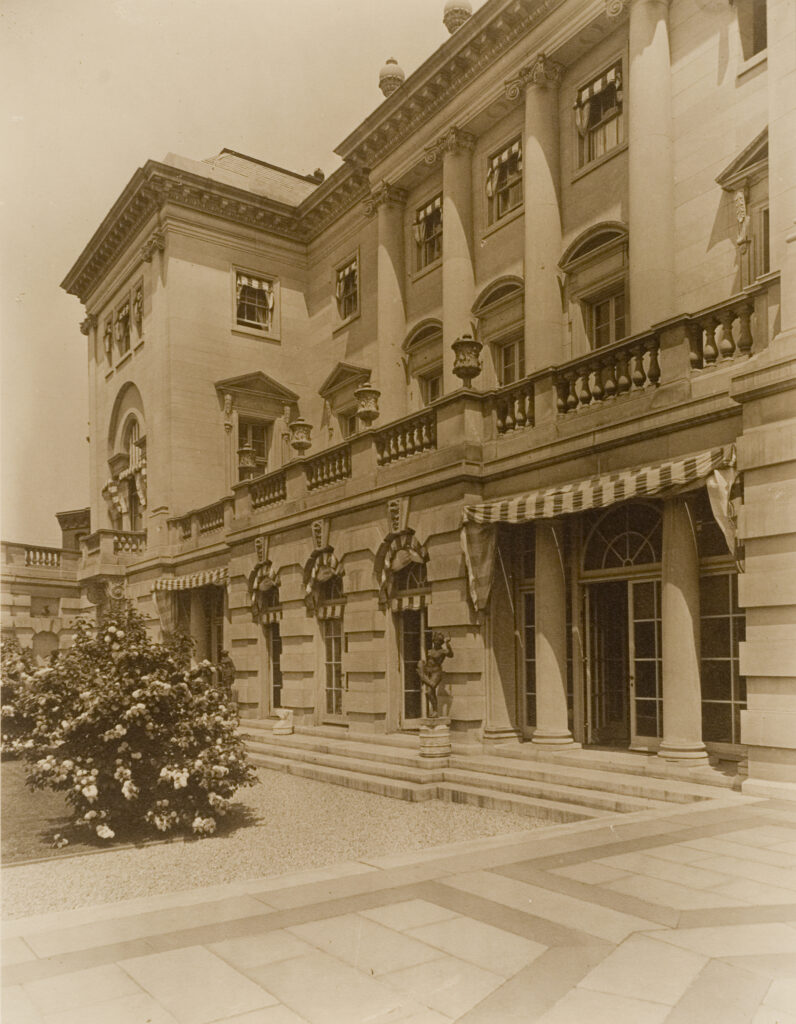 Click for a larger view.Garden façade
Johnston’s photographs of the Anderson House garden echo her images of gardens and other landscapes around the country, including of Weld, the Andersons’ estate in Brookline, Massachusetts. The Andersons’ walled garden, an Italian-inspired space on the south side of the house, provided a space for outdoor entertaining that had become wildly popular in early twentieth-century Washington. 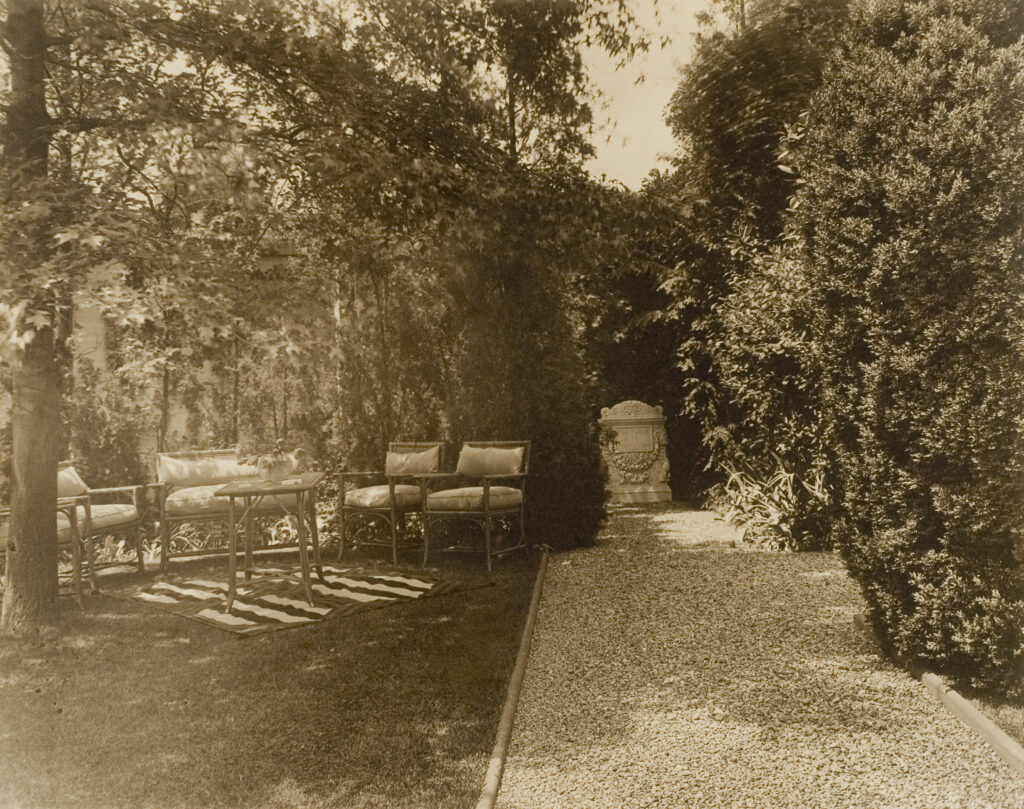 Click for a larger view.Garden, southwest corner
An April 1910 article in the Washington Post declared the Anderson House garden one of “the most beautiful gardens in the Capital City” and “admirably calculated for the mise en scene of an out-of-door gathering.” 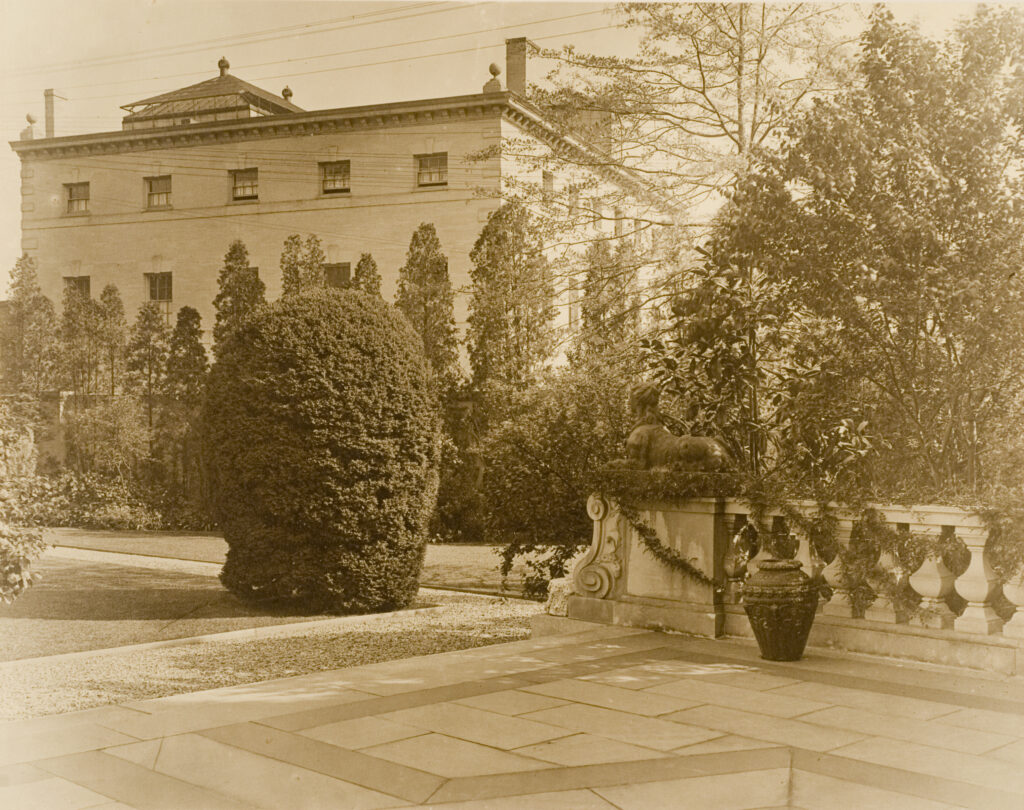 Click for a larger view.Garden
This photograph, taken from the west terrace of the garden facing east towards Dupont Circle, provides a rare view of the Andersons’ three-story carriage house and stable. This imposing structure was located off the alley on the eastern end of the garden and housed the Andersons’ cars, carriages, and horses, along with servant quarters and a third-floor squash court. Its most famous feature was the rooftop garden, which received frequent attention from local newspapers for the Andersons’ “dinners al fresco.” 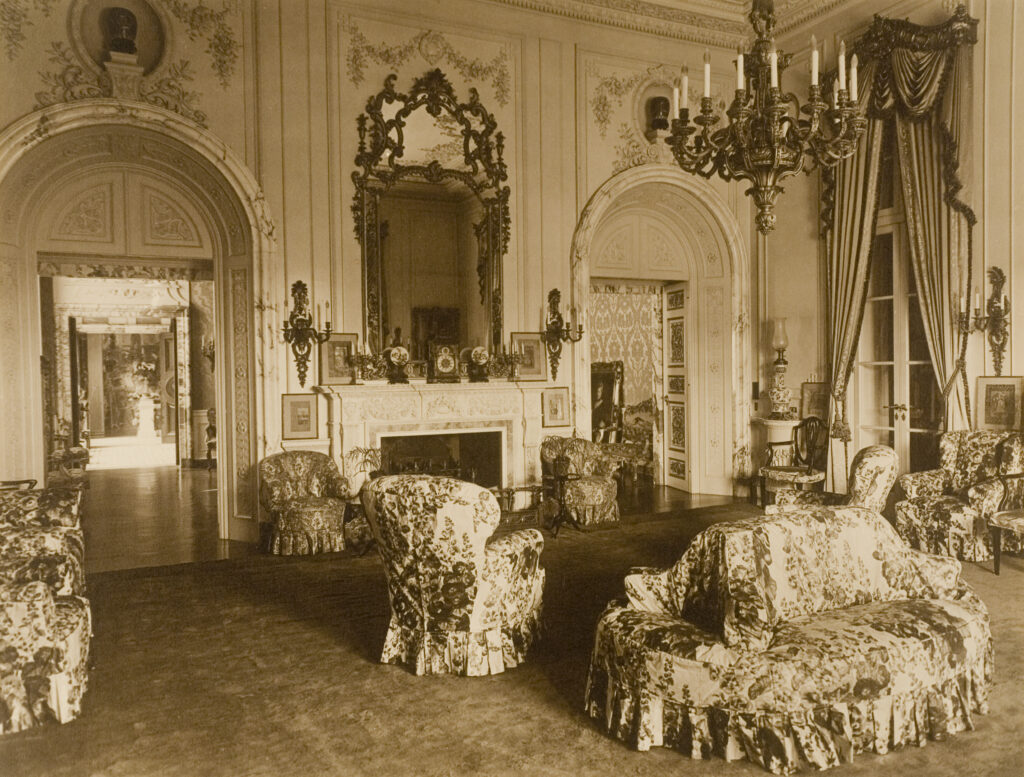 Click for a larger view.English Drawing Room
Almost all of Anderson House’s second-floor rooms were designed for entertaining. The English Drawing Room, with its English chintz-covered furniture and portraits of English nobility, served as a reception room. In this photograph, Frances Benjamin Johnston placed the English Drawing Room in the context of its surroundings, with glimpses of the French Drawing and Key rooms and the Great Staircase beyond its doors. 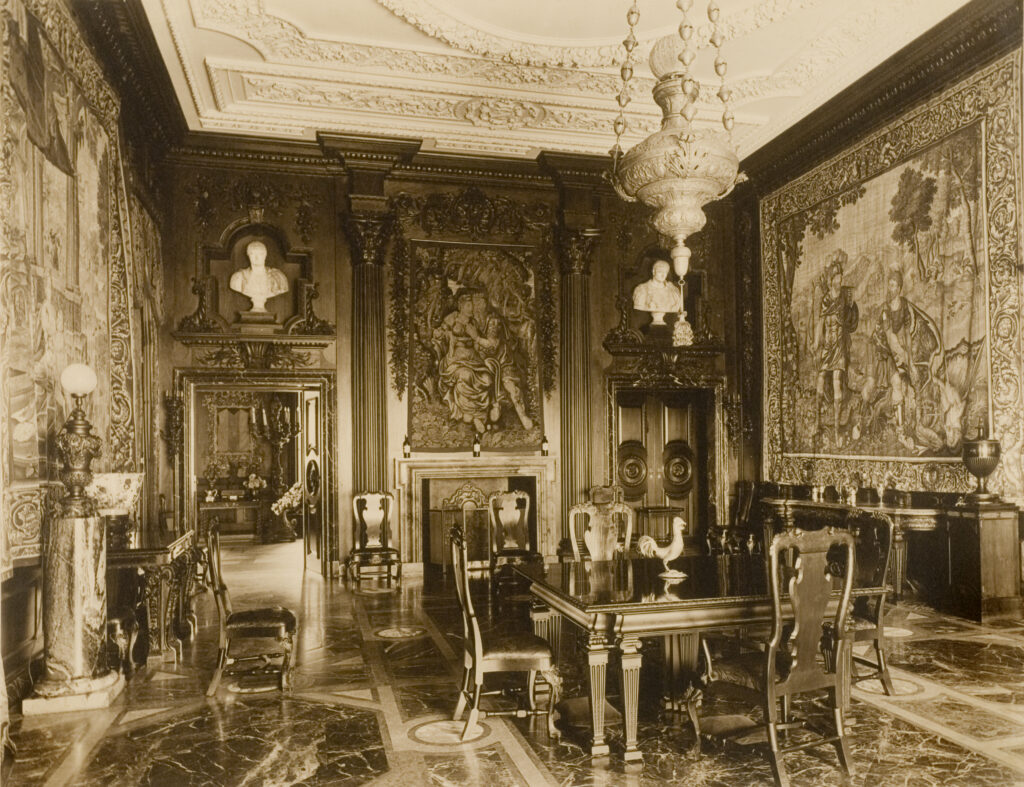 Click for a larger view.Dining Room
After mingling in the drawing rooms, guests at Anderson House proceeded through the Gallery to the formal Dining Room. The room featured tapestry panels of the Diana series, one of three Flemish sets the Andersons owned. 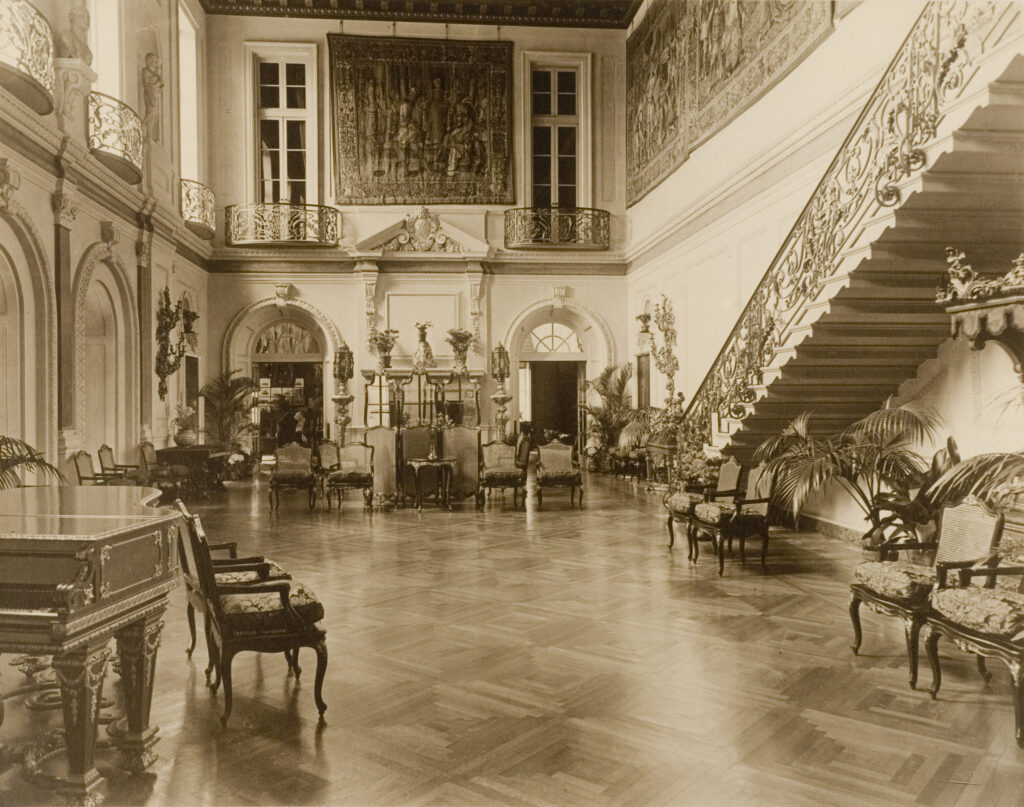 Click for a larger view.Ballroom
One of the most frequently used entertaining spaces in Anderson House was the Ballroom. Frances Benjamin Johnston probably used a wide-angle lens to capture as much of the Ballroom—and its “bric-a-brac,” as she called it—as possible. Among the room’s furnishings were a set of Louis XIV-style mahogany furniture, a Steinway baby grand piano, and a sixteenth-century set of Flemish tapestries depicting David and Goliath. 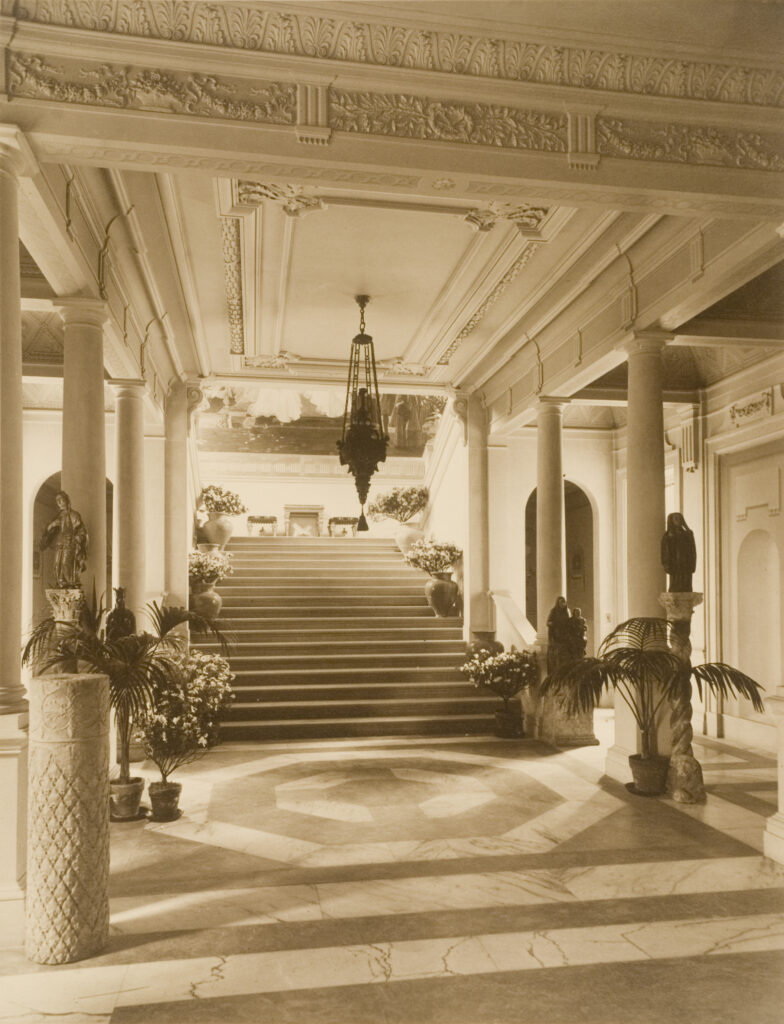 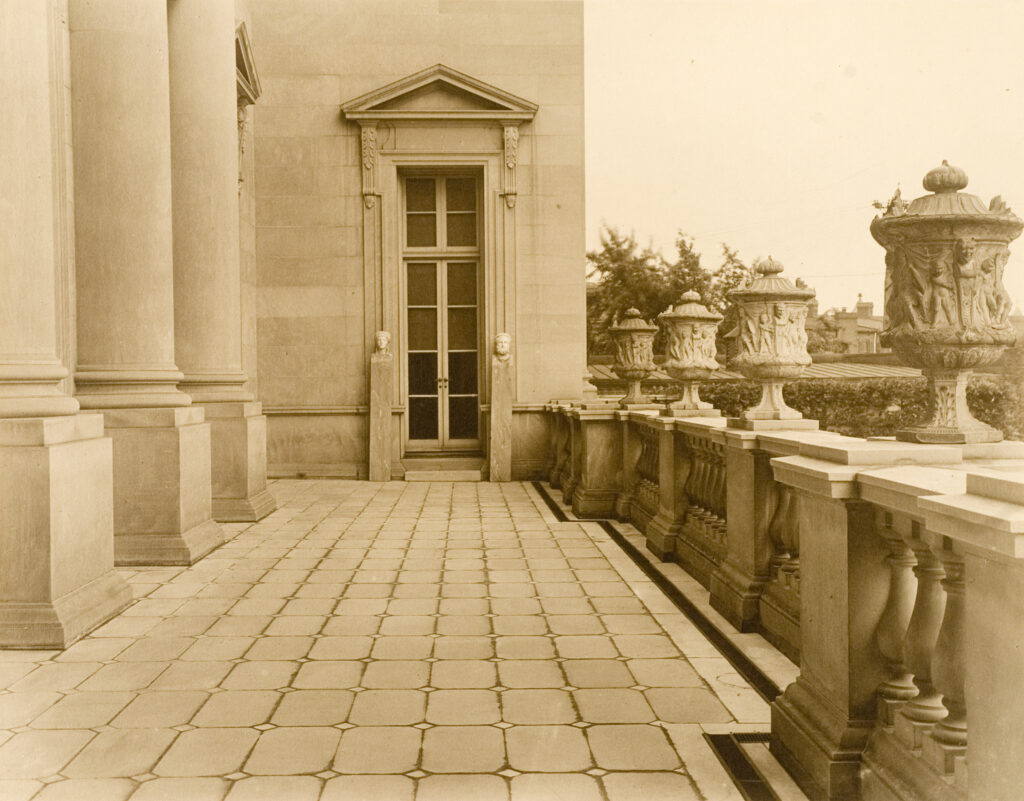 Click for a larger view.Terrace
This photograph of the second-floor terrace overlooking the garden displays some of the house’s exterior details, with the columns and balustrade opposite each other funneling the viewer’s eye to the doors beyond. (These doors lead into the Dining Room.) 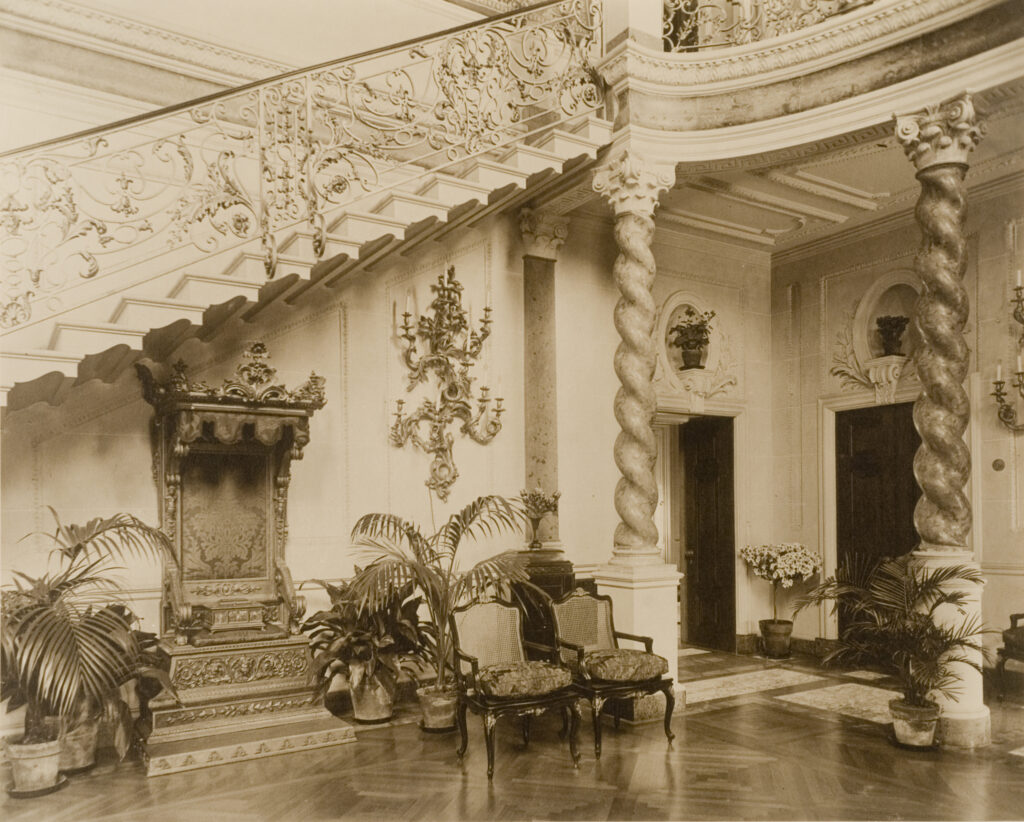 Click for a larger view.Ballroom, northeast wall
Johnston’s view of the northeast wall of the Ballroom showcases the room’s spiral Verona marble columns and flying staircase. The Washington Post hailed the staircase’s wrought iron balustrade as an excellent example of the trend of combining marble and metal in staircases—“light and graceful, yet with great strength.”
Home